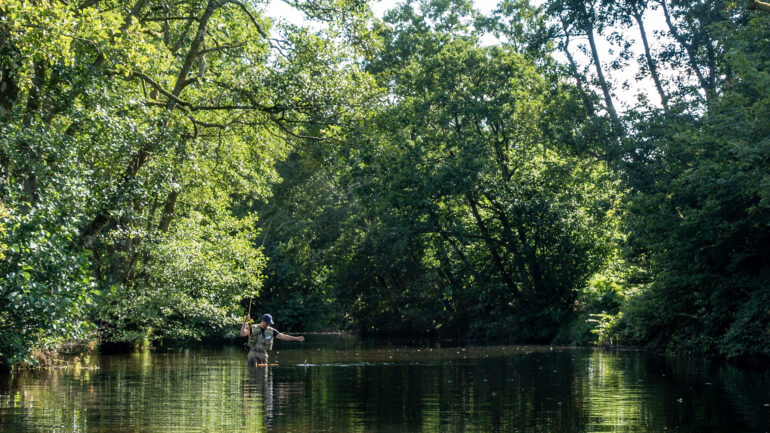 That’s a wrap. The season ended with a flurry of salmon reports in the final spate of the season. Bill Crumby had 3 around the 5lb mark and Russell Scott-Lawson ended the season on a high with a very nice fresh fish estimated at around 13-14lb (photo below). Richard Jackson and Nick Evens had a late season sea trout each of 4lb and 3lb respectively.

Time to get your catch returns for the season sent in to the catches@upper-teign-fishing.org.uk address please. 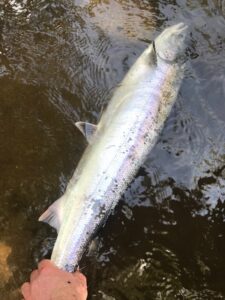 Matt Henley had two good sessions brown trout fishing around Fingle, catching fish to 12″ with several above 10″ all on dry flies. Matt also caught and released a 21″ sea trout, on the same night and pool that Nick Evens managed one of the same size, perhaps a pod of big fish is running the river now. 15 days left of the season; still plenty of fishing to be had.

Bill Crumby reported a fresh salmon of 6lb caught in August from Holly Pit.  Harry Chance has also had a prolific time catching many browns over the season, with August being a highlight month for him, amongst the many decent sized browns Harry caught and released 4 peal during the day on nymphs in fast or pocket water (one pictured below). His favoured stretch being between Fingle and Rushford Bridge. 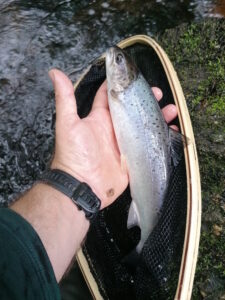 Charles Jarrold and his son Gus had a fantastic day and night on the river, starting below Chagford they had 4 brown trout each before dark then turned their attention to the sea trout. Between them they managed 9 peal to 2lb 8oz with action on the surface, a brilliant night out with some superb photos to match, see below. 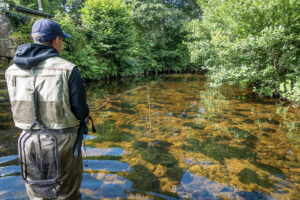 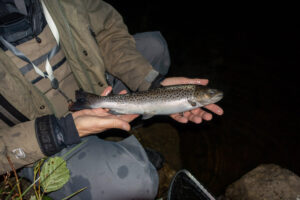 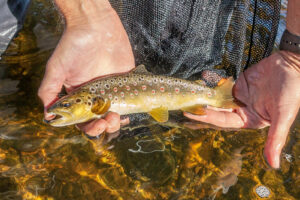 Not a lot of reports coming through on the emails over recent weeks. Chris Searles managed some nice brown trout over three afternoon sessions with the best fish around 15″ around Clifford Bridge. Darren Everitt has also been catching some nice browns, with two trout of 16″ in the Chagford reaches.

Richard Jackson and Nick Evens both caught and released sea trout of 21″. Matt Henley has also had success catching peal that are now in the river system. No reports of any salmon catches, though I have heard of a few ‘nearly got one’ reports!

Interesting data sent through from the Sowton fish counter today; unverified measurements suggest 505 fish passed in July, with 158 of them being over 55cm. There were some very large ones mixed in there too, so they are about!

Brown trout fishing has remained consistent over the past couple of weeks. Vernon Chapman had a good session above Fingle catching 6 brown trout, and Graham Dance fitted in a couple of trips to the river catching brown trout on both occasions. Most reports are coming back with dry fly action mentioned so it’s an exciting time to be out wading the river.

A few more reports of those elusive sea trout are coming in too, with Mark Durden-Higgins landing a good 3lb fish to a fly of his own concoction. Matt Henley, Richard Jackson and Nick Evens have also reported a fish each.

Rain is forecast for the end of the week; there could be a handy spate on the horizon.

Some great brown trout returns have been sent in recently. Greg Wood managed 4 nice brown trout to 11″ from the Fingle stretch. Paul Auckland managed to get out to the river twice, catching brown trout on both occasions, with one visit being a red letter day…around 20 brown trout to the net (you know it’s good when you lose count) mainly falling to the dry fly again from the Fingle area. Eric Kuchenbecker also got in on the action catching 5 browns to the reliable dry/dropper combo.

Paul Osborne caught a very nice salmon of 9lb 10oz (29.5″) below Clifford Bridge on the 5th July using a small Toby and single barbless hook….the fight lasted a fraught 15 minutes and the fish was safely returned to continue it’s journey. 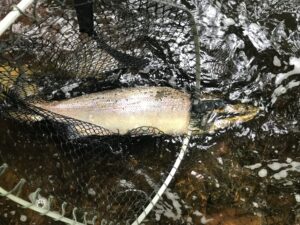 The settled weather has seen an improvement in the fishing of late. Sharif Adams is first to report some sea trout catches, with three nice fish from different pools above Fingle, one of these a fine 22″ sea trout, hopefully this is the start of things to come. Peter Aspbury, a day ticket angler, also had success with 6 brown trout above Fingle on dries and noted good hatches of sedge and some mayfly appearing.

The river has had several good spates over the past couple of weeks which has brought plenty of fish into our waters. Derek Myhill had a 9lb salmon spinning above Clifford. The river level looks more stable and with warm weather in the forecast the fishing should be good over the next week. Keep those catch returns coming in…

Catch returns are starting to trickle in now, perhaps most notably a 15″ brown trout caught by our Treasurer, David West downstream of Clifford Bridge. David used a Comparadun and reported some hatch activity towards the end of the day. A great fish to start the season for David.

With the rain we have had over the last few days there are sure to have been some fish running our waters ready and waiting…keep the catch returns coming in, it’s only a matter of time before we start to see reports of salmon and sea trout being caught…. 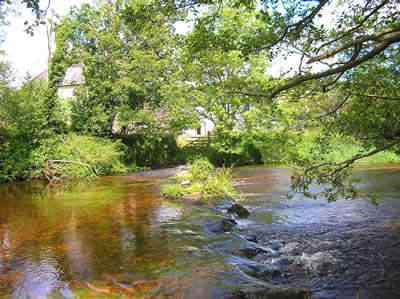